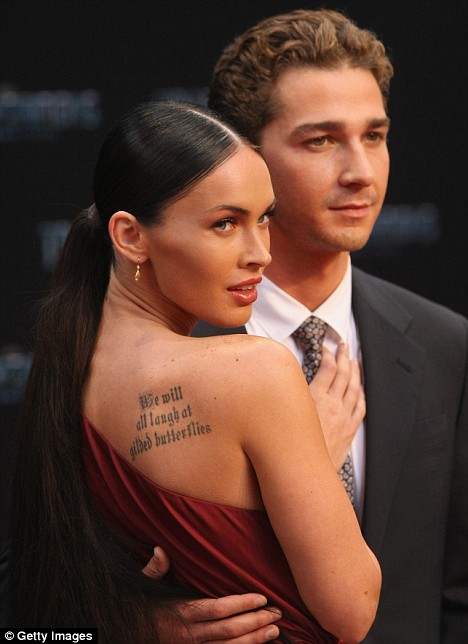 Megan Fox looked the image of physical perfection as she arrived for the German premiere of the new Transformers film tonight.

The brunette actress showed off her long limbs and toned body in a slit to the thigh asymmetrical red dress.

The only thing to mar her beauty were the unsightly tattoos on show – including a four-inch one showing Marilyn Monroe on her right arm. Her dress also revealed another on her back – a Shakespeare quote reading ‘We will all laugh at gilded butterflies’.

The inkings are two of the eight on her body – and if U.S. reports are believed she could soon have many more.

Megan is apparently planning on getting a tattoo sleeve – where her arm would be completely covered in the etchings.

But her mother Darlene is begging Megan to reconsider – fearing the body art will put off movie bosses and jeopardise her career.

A source told the National Enquirer: ‘She has never understood why her daughter would want to cover her gorgeous body with tattoos.

‘After each new tattoo, Darlene pleaded with Megan not to get more. Darlene believes that when Megan is a 40-year-old woman wanting to play more mature roles, people won’t want to hire her because it will be too hard to cover her tattoos.’

But as Megan walked the red carpet at the Berlin premiere of Transformers: Revenge Of The Fallen her tattoos didn’t stop the hordes of fans clamoring for her autograph.

The 23-year-old claims she didn’t work out before filming the movie – and only now is she ditching the junk food for a healthier way of life.

‘I’m a big sugar addict and junk food addict and just recently started trying to be a really healthy-type human being,’ she told the Insider.

‘Honestly, my bodyweight and muscle tone fluctuates constantly. I wasn’t super ripped or in shape in that movie.

‘I just started working out now so I’m getting better.’

‘I just always want to hold him and take care of him and make sure he’s happy and safe and kiss him on his forehead,’ she revealed.

Keep checking back in our gallery for more pictures of this event.

You can find out more about which cookies we are using or switch them off in settings.

This website uses cookies so that we can provide you with the best user experience possible. Cookie information is stored in your browser and performs functions such as recognising you when you return to our website and helping our team to understand which sections of the website you find most interesting and useful.

Strictly Necessary Cookie should be enabled at all times so that we can save your preferences for cookie settings.

If you disable this cookie, we will not be able to save your preferences. This means that every time you visit this website you will need to enable or disable cookies again.