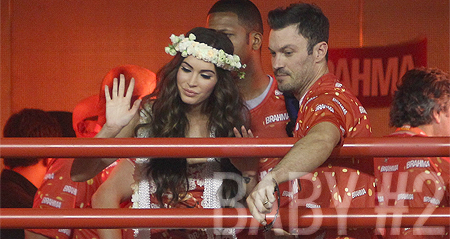 Megan Fox is pregnant with her second child with husband Brian Austin Green, Page Six has exclusively confirmed. Fox is represented by top publicist Leslie Sloane Zelnick, who told us,

“I can confirm Megan is expecting her second child with her husband Brian, they are both very happy.”

Fox and Green, who married in 2010, already have a 10-month-old baby son, Noah. Fox has recently been filming “Teenage Mutant Ninja Turtles” with “Transformers” director Michael Bay. We are told the pregnancy is in its early stages and she was able to keep the news of her pregnancy quiet on set so it didn’t interfere with her work. But Fox has said that motherhood has changed her perspective on her career.

“I recognize the blessings when they come…the ultimate satisfaction for me is being with my son,” she said. “All I wanted to do my whole, whole life was have a baby and, now, I’ve finally done it. I just want to give Noah as much of myself as I can. And I want to have more kids. That is where my heart is,” she added.

You can find out more about which cookies we are using or switch them off in settings.

This website uses cookies so that we can provide you with the best user experience possible. Cookie information is stored in your browser and performs functions such as recognising you when you return to our website and helping our team to understand which sections of the website you find most interesting and useful.

Strictly Necessary Cookie should be enabled at all times so that we can save your preferences for cookie settings.

If you disable this cookie, we will not be able to save your preferences. This means that every time you visit this website you will need to enable or disable cookies again.